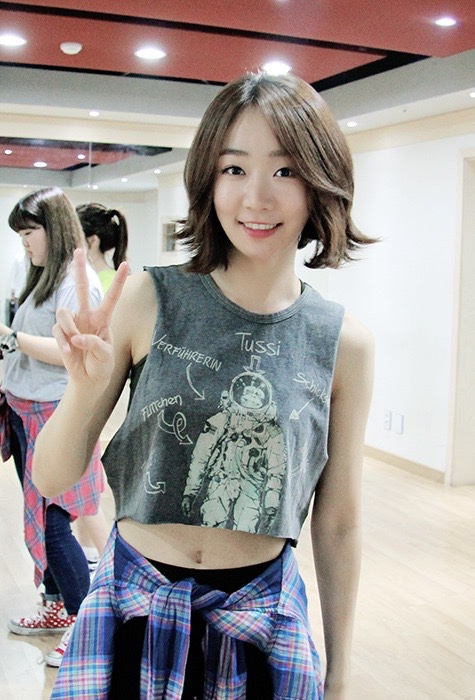 A photo of Sojin Ahn during Baby Kara. Source.

Update 8/13/15: When I originally published this post I didn’t think that many readers would read this since I was a newbie blogger and had like what? 5 followers? It’s unbelievable that I’ve been blogging for over half a year now and that this is my most viewed post to date. So I just wanted to thank you guys that have read and shared this post. As I said, this is one of my earlier posts on this blog so I apologize for the lack of balance of professionalism and bias, which I now constantly strive to display in my later blog posts. And for K-pop fans, I initially wrote this thinking my reading audience would be new to K-pop, so there’s a good bit of an introduction. I will often refer to “Gangnam Style” and other K-pop cliches.

Lately, I’ve been hearing two debates. Is the dress blue and black, or white and gold? And the controversy within the Korean pop music industry. It’s likely you’ve seen the dress, but I’m pretty sure you haven’t caught onto the K-pop situation. Recently, Sojin Ahn, a K-pop trainee, was found dead due to jumping off the 10th floor of her apartment building with thoughts of suicide. This onset of depression was partly due to the fact her contract with DSP Entertainment was terminated after many years of training. And in the past year, the industry of K-pop idols has experienced other deaths and group disbandments.

Before we get into the details of how corrupt these Korean idol companies can be, let’s do a crash course of what Korean pop is. Most likely, your main reference of K-pop is Psy’s “Gangnam Style,” a 2012 song that went viral. Obviously, that song is only a part of the K-pop genre, and K-pop is not defined by “Gangnam Style.” In fact, Korean pop is a musical genre that originates from South Korea and, despite its name, encompasses not only pop music but dance-pop, ballad, electronic, rock, hip hop, and R&B as well.

And a big part of K-pop is the global community of fans. The K-pop industry grows because of the Korean and international fans. These fans possess a great scale of devotion to their idols and participate in different traditions. For most fans, staying awake for a new released music video, re-watching a bias’s (a term used to connote your favorite member within a K-pop group) variety show appearances repetitively, or simply just replaying a song so often they can sing along even if their native tongue is not Korean is pretty common. These fans also make reaction videos to MVs, learn choreographies and create dance covers, and produce English and Korean covers of the original songs.

As for the companies, they produce these much adored idols in a different, complex process in comparison to other foreign entertainment industries. Many foreign countries have accumulated artists through shows like The Voice and American Idol, youtube, and self-recording artists, but the K-pop industry primarily uses the train and debut system. To make this easier, I’ve made a diagram.

So, essentially what aspiring K-pop artists do is audition, move to Seoul, train in various skills, prepare for their first stage appearance, and debut as a new idol. This course can take about 1 year to, more commonly, 5-7 years. And even after debut, many uncertainties still remain. Will they be received well? Will they gain popularity?

One of these aspiring artists was Sojin Ahn. She was a trainee under the Korean idol company, DSP. The company produced famous girl group, Kara, in 2007, but the band partially disbanded in 2013. The three remaining members that renewed their contract needed an additional member to further promote their music, so DSP female trainees were given a rare opportunity to possibly debut and be a part of a respectable and well-established senior group. Baby Kara, a variety show made to showcase these competing DSP trainees, allowed viewers to see the process of finding this new replacement member. Sojin was the oldest and, clearly, one of the most talented trainees featured on the show. Despite her abilities, at the end she was not chosen. Soon after her suicide, her fans from Baby Kara, learned that her contract was terminated a month prior to her death. Along with the tedious show and the many years of training, the terminated contract that resulted in no debut had to be her breaking point. DSP’s problem was not the idea of finding a replacement for Kara, but rather the sick approach and execution in publicizing the trials through the show. They promoted and gave Sojin the light, but took all it away from her at the end.

This was a comment in response to SR15B’s pre-debut video, and it’s very honest.  For reference, YG is a part of the Big 3 Korean entertainment companies that produce idols. Source: youtube.

Unlike Sojin, there are established artists that still face other tragedies after debut and gaining popularity. Another case occurred at the end of the last year, when two members of Ladies’ Code were killed after a car collision. Eventually the manager, that was driving the group home from an event, admitted fault. But was it really his? Obviously, he didn’t intentionally endanger his life and the group’s. Sometimes the companies overwork the artists and the people that work with them, making accidents like these prevalent.

And like any other entertainment industry, there have always been civil disbandments similar to Kara’s. But lately, disbandments have stemmed from the mistreatment of the artists. One case involved with Korean/Chinese boy band, EXO. Two Chinese members filed lawsuits against the company for promoting the Korean counterpart more than the Chinese and declining potential solo activities for the Chinese members without consultation of the group, and left the band. Another lawsuit was made by B.A.P, a group consisting of all male Korean members, to nullify their contract due to unfair profit distribution. Both boy bands debuted around mid-2012 and peaked in success in 2013, but they weren’t able promote as an entire group for even 3 years.

K-pop has a great international fanbase that is aware of the mistreatment of idols, but there are also many non-K-pop fans with “Gangnam Style” as their ringtone that have no idea. Hopefully this made a couple more individuals aware of this insane “survival of the fittest” system these companies have put in place and how detrimental they can be on an artist’s mind and body. These idols continue to endure emotional and physical hardships because they want to share their love for music.

And my credibility? I’m just a regular international fan saddened by this news. We’ve lost one more talented soul in this world, and I thought I’d share this piece of news with a few individuals that may not have been aware of this tragedy or how the K-pop industries work (it’s just a glimpse, obviously, there’s a whole lot more to it). Anyway, thank you for reading. I’ll end it here with Sojin Ahn’s words of wisdom: “Enjoy life.”

Sojin Ahn talking about her path to her dreams of becoming an idol was her way of “enjoying life.” Source. Gifs by Hanbins-mic.