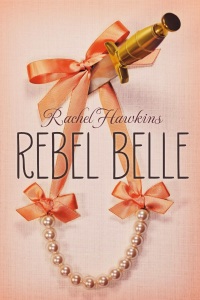 Naturally, after reading so many reviews about this being a hybrid novel between Legally Blonde and Buffy the Vampire Slayer, it became one of the most anticipated titles on my TBR list. So I borrowed Rebel Belle from the library at the end of April and read the first couple of chapters but as the month of May passed I found I was never compelled to pick it up again to continue. Eventually I ended up having to return my copy to the library and buying it as an ebook for myself. This wasn’t a bad book by any means, it was actually pretty fun and cute.

In Rebel Belle, Harper Price is the epitome of a southern belle and teenage perfectionist. She’s an honor-roll student, president of the student body, popular, and admired by all. Even though Harper stays busy, she manages to juggle a nice social life and has a great group of close friends and a supportive boyfriend. Basically, Harper has everything working perfectly in life, but then it all changes the night of the homecoming dance when she forgets her lip gloss (haha, it’s silly, I know). In the process of freshening herself up for being pronounced the night’s homecoming queen, she ends up witnessing her school’s janitor being murdered by her history teacher in the girl’s bathroom. As Mr. Hall, the janitor, takes his last breaths, he transfers his assassin’s skills and knowledge to Harper through a kiss-like maneuver (ew) and proclaims her as the next Paladin. Harper soon discovers that her newfound powers are supposed to help her protect David Stark, her least favorite person and someone she’s had a feud with since she can remember. A confusing love-hate relationship develops between them, and they are forced to figure out their new roles and the mysterious destiny they must fulfill the night of the Cotillion ball.

Okay, so let’s just start with how I absolutely adored Harper as a protagonist. She’s likable, sensible, and does her job well as an informative and funny narrator. There were quite a few moments where I found myself bursting out in laughter for how silly and comical some of the scenes were. I also really enjoyed Hawkins’ writing style; the book was well written and she seamlessly made the high school friendships realistic and cute. Another thing I appreciated, at first, was the unique and different concept of the Paladin. I especially enjoyed how Hawkins decided to incorporate it in a way that highlighted the southern charm in the normal Harper when she’s not kicking butt. Overall, the idea of a southern belle being both ladylike and an assassin is pretty badbutt and creative. This was also set in good ol’ southern Alabama, which I found nice being a southern gal myself. The mention of sweet tea and hummingbird cake was also a nice plus.

However there were a few aspects of the book I was quite dissatisfied with. Even though the use of the mythology was original, the Paladin concept lacked depth and at times was not convincing. The Paladin is supposed to be a sworn protector equipped with agility and ninja skills, but other than being a protector, what else? Therefore, I found that the fantasy portion of the urban fantasy element really lacked, making the plot become almost irrelevant and boring at points in the book. Also, early on (like the first chapter) readers learn that Harper’s sister died from driving under the influence of alcohol. Instead of taking advantage of her sister’s role in the story it sort of fell flat too. Her sister’s death should have been the ideal contemporary element in the book and could have built Harper’s character even more. Hawkins tried to make it part of Harper’s identity by using it to explain Harper’s work ethic and personality, but other than that there wasn’t much contribution overall.

And the last thing that probably bothered me the most was the love triangle, which is pretty surprising since I tend to overlook and not complain about them. Ryan, Harper’s boyfriend, is that loyal, supportive guy any girl would want to have in her life… but Harper doesn’t want him! Instead, Harper, though mostly a sensible protagonist for the entire book, suddenly feels attracted to David, who’s a guy Harper’s hated pretty much since they were in diapers. It’s strange and inconsistent for her character to be suddenly charmed by him just because her new Paladin duties make her obligated to protect him. Also, David isn’t even a sweet guy, in the beginning he was quite a douche. Sigh. I guess sometimes the good guys aren’t chosen, but I still thought the love triangle was on the weak side and unnecessary.

I’ve never read any of Rachel Hawkins’ work prior to Rebel Belle, but readers have raved about how she creates books in the ya contemporary and urban fantasy crossover genre. For me, I wasn’t that thrilled with the balance between contemporary and fantasy with this one, but I have to admit I was pleasantly surprised by how much I enjoyed Rebel Belle once I got into it. It’s a great summer read and one that will have you laughing for it’s comedic scenes for sure.

So my last book review on Maximum Ride Forever was super long so I bolded the main points of my review. I tried to do it again with this review, and I have a question: Is using this format easier for you guys to read? It would help a lot if you guys did the poll below! As always, have a happy Tuesday, and thanks in advance! 🙂