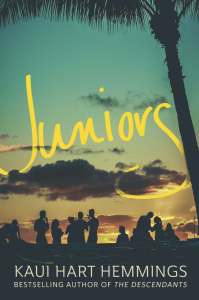 In Juniors, Lea Lane goes through a number of changes her junior year of high school. She transfers to Punahou School, the largest independent academy in the United States and considered one of the most prestigious, and moves into a nice house owned by the prominent West family in upscale Kahala. After the move, Lea finds herself missing her rundown apartment in Oahu and her best friend, Danny, who is also part-Hawaiin like herself and seems to understand her the most. But then she befriends Whitney West and develops a secretive relationship with the unattainable Will West. Lea is just beginning to find herself accustomed to the attention with being connected to the West family. However, some foreseen drama sprouts, and Lea has to ask herself what she really wants out of life, whether to live on the safe side of the shore or to take risks and just ride the waves.

I’m actually primarily a fantasy/paranormal reader, but as you guys could probably tell, lately I’ve been in a contemporary phase. With that being said, I think I am more critical towards this genre than most readers. For a contemporary, I expect realism, gripping plot, and unique writing. Juniors delivered all these. Well, sort of. Let me explain.

Hemmings proved she was a fantastic writer with The Descendants, her bestselling adult novel also set in Hawaii and actually became a film that featured George Clooney and Shailene Woodley in 2011. From my understanding, Juniors is a similar but still unique watered-down version of The Descendents. As Juniors‘ Kirkus starred review mentions “Hemmings turns her plot on intergenerational family complexities and contradictions, secrets and revelations.” There are realistic portrayals of human tendencies, and the protagonists (for both The Descendants and Juniors) are quintessential representations of their age groups. Lea’s narrative was very believable. She’s a perfect depiction of a teenager. The silly things that young girls do when they’re in like-not love-was expressed. I admit I was one of those infatuated girls once upon a time. And I cringed when I read Lea’s naivety. But that’s just it, Lea’s impulsive and clueless but I actually didn’t dislike reading her narrative. She was just very real.

I also loved the dynamics between Lea and Whitney’s friendship. Even though this was Lea’s story, it was really intriguing to get to know Whitney’s character through their friendship. Whitney is wealthy, beautiful, popular, and pretty much everything her mother and her school expects her to be. However she’s also a closet reader, low self-esteemed, and vulnerable. Everyone sees her but not for who she really is. When Lea notices Whitney’s brokenness Lea heals Whitney by being honest, not judgmental, and a true friend to her. The Lea and Whitney scenes illustrated a lot of qualities that can be commonly found in friendships: fake sincerity, shallowness, the “importance” of hierarchical status, the feud and separation between cliques, etc.  Ironically enough, a few days ago, my friend and I just talked about how some group pictures among friends can appear so shallow. Behind bright eyes and smiling faces, there can be tension and an insincerity an onlooker or photographer would never know. How appropriate, that this book sold this idea so inimitably.

However, despite my praise and delight with the deep messages this book was able to encompass, I felt Juniors didn’t reach it’s full potential in terms of the overall plot. As I read the wonderfully written scenes, at times moved my how it could depict human flaw so well, I forgot the main focus of the story: Lea’s struggles with not “being stuck in between” and to make her junior year epic with her own decisions. It wasn’t until the very end with Lea and Whitney’s “walk” did I feel myself reeling back to the initial scene with Punahou Peer Counseling “truth walk” and the main point of the story. Also, the writing was good but it wasn’t remarkable or blew me away as I had been this year with other contemporaries. So I was a bit disappointed in that respect as well.

Yet, I found the distinctive setting an incredible bonus for Juniors. I was very happy to learn a little more about Hawaii and Hawaiian culture. It was evident from page one that Hemmings spent time in Hawaii as a kid. The incorporation of some pidgin and the continuous reminder of “vog,” the fog created from volcanic ash and smog, were details that made this book stood out among other young adult literature.

Overall, this was a very fun summer-y book with excellent depictions of island life, surfing, and other tropical imagery. Juniors isn’t exactly a strong young adult debut, but it’s a great standalone if you’re starting to feel the chills of Autumn and want to revisit summer.

Thank you G.P. Putnam’s Sons for giving me the opportunity to read and review this. In no way did this affect my reading experience or honest review.