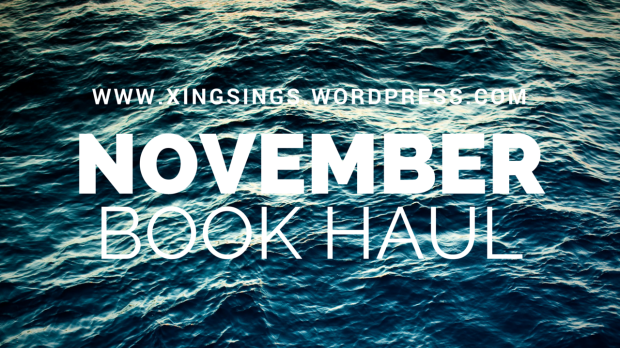 Ahh, well it looks like yet another month of 2015 has past. November really felt like it flew by for me since I didn’t do much reading or blogging. I think I ended up finishing only one book, The Anatomical Shape of the Heart (review here), which is disappointing. However, I did buy a lot of books! #foreverbuyingbooksfasterthanIcanreadthem

As I’ve told you guys before I rarely buy books at full price but I guess since it’s Christmas season I went ahead and splurged on a lot of new books this month. Most of my buys were in preparation for Yallfest signings (if you haven’t already you can read my post with a recap of that event here). And, of course, while I was in Charleston I went ahead and purchased a few to help support the Blue Bicycles Books independent bookstore. All the books there were signed so that was another nice bonus.

I’m also quite satisfied that I was able to buy six manga volumes to help fill in the gaps of my collections. There was a buy 2 get 1 free Black Friday deal and I couldn’t pass up since new manga are rarely on sale over here. Overall, I was pretty proud of myself on Black Friday weekend though. Other than those manga I bought, I only purchased a few things at Loft since the entire store was 50% in store including the sale section and finished up buying Christmas presents.

Alright, so that pretty much explains what my November purchase history was like. Now we can get to the pictures, my favorite part!

The Wrath and the Dawn | Everything, Everything | Never Fade | Through the Dark | Red Queen | Royal Wedding | Another Day | The Ruby Circle | A Thousand Nights | An Ember in the Ashes | Talon | Rogue

Well if you saw my Yallfest post, I’m sure you noticed a similar picture to this. Some of these purchases were so that I could stand in signing lines (I didn’t own a lot of the books by authors that were going to be there other than Leigh Bardugo and Marissa Meyer). Others were total impulse buys (mainly Talon and Rogue; they’re just pretty)! And, like I said, all of these happen to be signed.

These are just random physical books I bought throughout the month at my local bookstore. I haven’t read Ms. Peregrine’s Home for Peculiar Children but Hollow City was on sale in hardcover for a couple dollars so I couldn’t really resist. Plus, a lot of my blogger friends seem to enjoy this haunting series. The Soundless purchase was just so me and doesn’t really need to be explained. And the manga splurge was due to that Black Friday sale I mentioned earlier. (OTL I’m not sure why I took a picture of the Vampire Knight books in scrambled order; it’s going to bother me for sure.)

Strangely, I was particular lucky with all the ARCs this month. I know that the top three are already out for sale (and Not If I See You First by the time this post publishes) but I’m still so excited to read them all. This month was particular special with review copies for two reasons; I started getting unsolicited review copies (the first three in the photo) and I was approved for A Gathering of Shadows. So I want to say thank Penguin Random House, Tor, St. Martin’s Press, Sourcebooks, NOVL, and Epic Reads!

And What You Left Behind was an ebook I got approved by Netgalley some time last month (October) or November. I honestly couldn’t remember but I went ahead and included it in this month’s haul!

Succubus Revealed | The Eye of Minds | The Rule of Thoughts | Simon vs. the Homo Sapiens Agenda

Lastly here are all the ebooks I purchased for the month. My rule with ebooks is that they’re not really tangible so it has to be under $2 for me to buy them. After I borrowed Simon vs. the Homo Sapiens Agenda (review here) early this year I knew I wanted a copy of it since I really enjoy rereading. I guess an electronic copy will have to do. The James Dashner buys were totally by impulse because I haven’t even read The Maze Runner yet despite already having that series in its entirety. The Succubus Revealed was just to help compete my collection of Richelle Mead books. I didn’t notice till now that I actually had two Richelle Mead buys this month!

So that’s it! Hope you all had a lovely November and a fantastic start to December! Until next time (this really means until the next scheduled post; I made like 10 scheduled posts already)!