Top Ten Tuesday is a weekly bookish meme hosted by The Broke and the Bookish. It was created to allow the book community to share ten books every week in response to a chosen theme.

I had to participate in this week’s topic because I love summer related Top Ten Tuesday themes. 😉 In fact, I did last year’s equivalent to “beach reads”/”summer TBR” last summer. And the hilarious thing is that I didn’t read a single book from that supposed TBR pile. I’m not really surprised since I’m a big mood reader. That’s why I never make monthly or seasonal TBRs; I never would follow through, haha. However, I have a feeling I’ll work through this one closely because most of these titles are planned buddy reads and/or books I just have been dying to read for some time now.

And I know most people like to read contemporaries in the summer, but since I’m generally a fantasy reader I like to read those during the hot season as well. 😛 Plus, the summer is really my only chance to really freely read-especially this summer since I’m not taking any summer classes.

The first five books on top of the photo are all ARCs and review copies I received many months ago. Normally, I would have felt guilty about not reading and reviewing them in time for the release dates, but I don’t feel so bad about these since the first two (Dreamology and When We Collided) were just giveaway wins (actually Dreamology was the book I got when I went to Yallfest last year at the Epic Reads booth) and the next three (Some of the Parts, Not If I See You First, The Serpent King) were unsolicited copies I got from Random House but didn’t request myself.

As for the five other books, those were all ones I purchased myself. I chose Fangirl, because, gosh, I just need to read more Rainbow Rowell! My only exposure to her work was her short story contribution, which I adored, in My True Love Gave to Me (my review). The remaining four (The Wrath and the Dawn, The Rose and the Dagger, Divergent, and My Life Next Door) are other books I told myself I had to read this summer because of the hype and popularity.

Do link your lists! I’d love to see what you are going to read this summer or what books you recommend as beach reads. 🙂 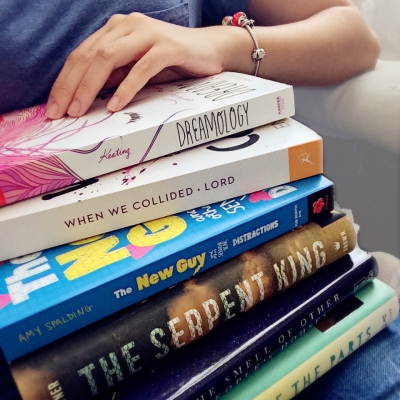 68 thoughts on “Top Ten Tuesday: Ten Books I Plan to Read on the Beach (or This Summer)”