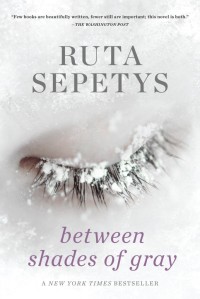 Between Shades of Gray sets place in early 1940s Europe. A young Lithuanian girl and her family are torn from their comfortable life and sent to a camp in Siberia and later a prison in the Arctics; at both locations and during the passages between they will witness and endure horrifying treatment from the Soviets under the rule of Stalin. This affecting novel recounts a journey that spans over several years and covers 6,500 miles. It displays one of humanity’s unfathomably darkest and most hidden parts of history.

“Andrius, I’m… scared.”
He stopped and turned to me. “No. Don’t be scared. Don’t give them anything Lina, not even your fear.”

I’ve read a good share of books on WWII-it is one of the rare historical periods that I am fascinated by; and it’s unbelievable that it actually hasn’t transpired too long ago-but this one was unlike any other that I have read. Between Shades of Gray really did a number on my heart. It left that organ all battered and bruised up. Lina’s journey wasn’t an easy one to follow but the harrowing trek was absolutely worth it because I am now aware of a side of history I never knew even existed.

When thinking of Europe during WWII, I immediately conjure Hitler and the Nazis cruel tactics of creating a superior, “master race” (with the genocide of Jews, murder of the anti-conformists, etc). Stalin doesn’t even cross my mind. After looking at Sepetys’ author’s note (which also evidently shows how extensive she researched this subject) and watching this video, I understand why what Stalin and the Soviets did became such an obscure piece of history. Survivors of the Baltic countries (and their families) stayed quiet for many years post-war since they were still under Soviet occupation until the early 1990s. But I am still utterly mindblown by how much Stalin and his equally as brutal and harsh reign are glossed over in school and textbooks all the same. This really needs to change, and I’m glad that Ruta Sepetys has already taken steps forward towards achieving that by creating this book.

Have you ever wondered what a human life is worth? That morning, my brother’s was worth a pocket watch.

I can now also see why so many readers praise Sepetys as a brilliant voice in YA historical fiction. The prose isn’t fancy but the masterful, evocative storytelling tugs at the readers’ emotions. I liked that the author didn’t get carried away with descriptions. Though this confession may sound strange, sometimes being too descriptive takes away the readers’ attention from the simpler but significant details. The lack of verbiage made the dialogue and writing easy to read all the while engaging.

Sometimes there are characters that are so brave that they borderline foolish. And that’s how I’d best describe Lina. Our young protagonist is annoyingly reckless but in a very realistic way that makes her character forgivable and even beautiful. For the majority of the book, she is sixteen. The quick bitterness and betrayal she feels, her rash behavior, and the dumb, selfish decisions she makes are how a teenage girl should react in such conditions. For the very reason that she portrayed a realistic depiction of a teenager is why she was a tolerable narrator despite her sometimes questionable actions. Same goes with her younger brother, Jonas. (Though he came off more endearing than anything from the get-go, for me at least anyway.)

The children in Between Shades of Gray certainly witnessed too much while they were too young (because that is the reality of such a period of history), but I was so pleased that Sepetys didn’t strip their immaturity completely. I like that there are many instances where loss of innocence and disillusionment are shown, but also moments of childish vulnerability. The balance the author creates with her younger characters are excellent.

“Krasivaya. It means beautiful, but with strength. Unique.”

And it was obvious from the first chapter that I would really come to admire Lina and Jonas’ mother, Elena. What a kind and beautiful soul she had. Like Hitler and the Nazis, Stalin and the Soviets did things that would dehumanize people and break their identity. But Elena was a true paragon of strength and resilience. Her steadfast leadership, voice of reason, and continual selflessness were constantly exposed; in a place full of despair the rest of the cast (and readers) needed her.

How did I get here? How did I end up in the arms of a boy I barely knew but knew I didn’t want to lose? I wondered what I would have thought of Andrius in Lithuania. Would I have liked him? Would he have liked me?

I wasn’t expecting one but in the midst of all the horrifying events, there is a small but powerful love story. After the many heartrending scenes, I grew to depend on the sweet moments that Lina and Andrius shared. Of course, there were ups and downs in their relationship, but they were lovely. (I cried a mix of sad and happy tears when I reached the epilogue.)

Whether love of friend, love of country, love of God, or even love of enemy—love reveals to us the truly miraculous nature of the human spirit.

While Between Shades of Gray was a relentlessly depressing fictional account of a dark period of history, it ended on a ultimately hopeful message-emphasizing that love can be the miraculous fuel for one’s survival.

I have nothing to complain about this emotional and phenomenal debut. Aside from it having escaped from under my radar for so long. I was so impressed and touched by the story within the pages of Between Shades of Gray. I especially love that among all the cruelty and brutality, there is some sunlight with themes of love, hope, and faith. It was also nice that the two opposing sides weren’t represented as so black and white. With gray characters like Kretzsky, readers are able to see that the “bad side” may consist of some individuals that do possess kindness.

And did I mention I finished the entire novel in one sitting? That’s right, all 352 pages in one go. It was extremely compelling.

Anyway, if this is Sepetys debut novel, I can’t imagine how brilliant her other works must be. Between Shades of Grey is fiction, but the unspeakable horrors of what Latvians, Estonians, and Lithuanians experienced under Stalin’s rule are very real. With Lina’s story, I gained knowledge on a side of history that hasn’t received enough attention. So I want to thank Ruta Sepetys for writing about an unforgettable and important time period that is personal to her family but also to millions that suffered.

10 thoughts on “Between Shades of Gray by Ruta Sepetys”