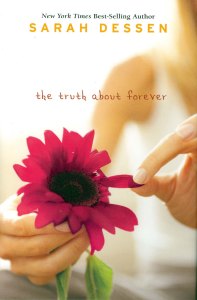 I’d tried to hold myself apart, showing only what I wanted, doling out bits and pieces of who I was. But that only works for so long. Eventually, even the smallest fragments can’t help but make a whole.

After witnessing her father’s unexpected death, Macy has always sought to find control of her life by planning for the expected. She likes the certainty of knowing what will happen next. So when her boyfriend, Jason, is away at Brain Camp, she decides to spend her summer subbing for him at his library job, studying for the SATs, and occasionally making small talk with her mother about anything but the traumatic loss of her father. But when she meets the dysfunctional team at Wish Catering, a group accustomed to chaos and surprises, after they cater at one of her mom’s parties she starts to feel compelled to breakaway from her steady and sheltered life. Because, perhaps, the key to truly living is not to dwell on the past or wait for the future, but instead embrace each moment of the present.

The Truth About Forever will forever be my favorite YA contemporary. Much of it has to do with the fact that I read this when I was the same age as the protagonist and I was going through many of the things she was at the time. It hurt to see how similar our personalities were. I’m shy and quiet by nature. I don’t like going out. And I struggle with opening up and making friends. So when I read this book I couldn’t help but connect with Macy, more so than I did with any other YA heroine.

Like all Dessen books, this one possesses a unique type of simplistic writing that is worth mentioning. Nothing about Dessen’s prose is ever flashy or complex but it still continues to move readers with memorable, impactful lines. The easiness of how the writing can be read gives the book a quiet allure. In fact, some of my all time favorite quotes reside within the pages of The Truth About Forever.

What I really admire about this author is that she’s able to continuously deliver genuinely real characters that young adults can relate with. And this is normally achieved with plot devices minus the unnecessary drama seen in most modern contemporary novels today. The angst is kept at a minimal and there are seldom love triangles involved.

“Grief can be a burden, but also an anchor. You get used to the weight, how it holds you in place.”

Of course, another Dessen trademark is tackling important issues that young adults don’t uncommonly face in their lives.

Maybe that’s what you got when you stood over your grief, facing it finally. A sense of its depths, its area, the distance across, and the way over or around it, whichever you chose in the end.

One the biggest hurdles that Macy overcomes in this is how to address her grief, or more specifically allowing herself to learn it’s okay to not be okay.

“When my dad died, it was like everything felt really shaky, you know? And trying to be the best I could be, it gave me something to focus on. If I could just do everything right, then I was safe.”
…
“That sucks, though,” Wes said finally, his voice low. You’re just setting yourself up to fail, because you’ll never get everything perfect.”
“Says who?”
He just looked at me. “The world,” he said, gesturing all around us, as if the party, this deck encompassed it all. “The universe. There’s just no way. And why would you want everything to be perfect, anyway?”

Because of those around her, particularly her mother, didn’t recognize this need of hers, Macy had a lot of pent up feelings from her father’s sudden death. This also led her to self consciously be aware and fear that she was known as the girl that saw her dad die. She didn’t want comfort or pity from others. So she became someone that carried an unapproachable facade and tried to attain something unattainable: being “fine” and “perfect” at all times.

Luckily though, she meets the Wish Catering crew. Which brings me onto the subject of how amazing the cast is in The Truth About Forever.

“It’s just that… I just think that some things are meant to be broken. Imperfect. Chaotic. It’s the universe’s way of providing contrast, you know? There have to be a few holes in the road. It’s how life is.”

I can’t decide which female side character was my favorite because all of them were so equally awesome and significant towards Macy’s development. Delia, though she leads a disorganized and hectic life, is a great support for Macy throughout. I think she guides Macy during a time when her mother wasn’t there for her. (Readers see this in chapter 16’s hospital scene.)

“What you have to decide… is how you want your life to be. If your forever was ending tomorrow, would this be how you’d want to have spent it? Listen, the truth is, nothing is guaranteed. You know that more than anybody. So dont be afraid. Be alive.”

And, hands down, Kristy is one of my the best supporting character best friends. She’s doesn’t beat around the bush and is straightforward when she gives Macy advice. She’s confident, optimistic, and real.

“What you need, what you deserve, is a guy who adores you for what you are. Who doesn’t see you as a project, but a prize. you know?”

I also love that she treasures Macy so much. This girl is totally best friend goals.

“There is never a time or place for true love. It happens accidentally, in a heartbeat, in a single flashing, throbbing moment.”

Now, the romance. I admit that The Truth About Forever‘s romance is slightly cliché. However, it’s one that doesn’t fail to make readers swoon all the same. Sa-woon even. (Only those that have read the book know what I mean with this particular emphasis.) And it also helps that Wes is extremely attractive-in looks and mannerisms. I remember when I read The Truth About Forever for the first time, Wes instantly became the standard in which I’d compare future fictional romantic interests to. As Macy describes in one of the scenes, he has a brooding, tortured artist aura going on but that doesn’t become his defining trait. What I like most about Wes is that he gives Macy her space. He encourages her to be herself and change if it helps her get to her goal, but ultimately he allows her come to her own decisions at her own pace. The best thing about their healthy friendship/relationship is the respect that he has for her.

“It was just one of those things,” I said, “You know, that just happen. You don’t think or plan. You just do it.”

Therefore, with the help of the people she meets at Wish Catering in the summer, Macy learns to accept her true self, whatever that may be. She comes to embrace change and uncertainty. And she’s finally open to the idea that living doesn’t have to be about remembering the past or bracing for the future. Sometimes forever can exist in one moment during the present.

Really, the greatest part of this novel was Macy’s growth, especially since it took a lot of convincing and was slow moving. (However, all of the heroines in Sarah Dessen’s books are a different, changed, and better person by the end. And the journeys that each take are always touching and believable, which is why I think these Dessen-created female protagonists are such great role models for young girls.)

It’s all in the view. That’s what I mean about forever, too. For any one of us our forever could end in an hour, or a hundred years from now. You never know for sure, so you’d better make every second count.

The Truth About Forever is one of the few YA contemporaries that I fell in love with when I was a young adult myself, and I don’t foresee myself falling out of love with it any time soon despite that I’m growing further from the age when I read it for the first time. And it is the perfect summer read for those wanting to experience the nostalgia of young love and self-discovery.

Thank you Penguin Random House for inviting and allowing me to participate in the 2017 #ReadADessen blog tour.

Also, Penguin provided a giveaway link for you guys to win an entire collection of Sarah Dessen’s books. You can check that out here!

Oh and here’s a surreal moment when I got to meet Sarah Dessen and get this book (among others) signed last November at Yallfest!

Summer’s Playlist:
Stop and Stare | If It’s Up to Us | The Mixed Tape | Move Along
*the bold/underlined are must listens!

13 thoughts on “The Truth About Forever by Sarah Dessen + Giveaway”