Hello, friends! As promised, I definitely became a casual blogger last month where I posted quite spontaneously. Though I missed the times I was away from this corner of the internet, it was also very liberating to just not have a schedule.

Because I’ve been rather inactive, I’ll be replying to comments (including finishing up the ones from my last discussion post months ago-I’m truly so sorry it’s taking me ages!) and blog hopping very soon.  (I’ve already bookmarked a list of your blogs. So expect to see me around!) I’ll probably be doing this early to mid next week since I have to work today and tomorrow at the salon.

Anyway, onto the recap of July.

There were a lot of highs and lows last month. Exo came back with a new album, but, unfortunately, without my favorite member, Yixing. Then I saw the tragic news about Chester Bennington. (More on this later.) And then, again, happy news… I recently learned that I’ve been hired as a permanent, paid year-round intern at the local independent pharmacy I was on rotation (which is basically an externship where I’m not getting paid but rather graded on my performance) at in June. (However, I’ll share more about that as well in next month’s wrap up since it really happened a few days ago, at the beginning of August.) I just wanted to share the great news with you guys, early, since you’ve been along this journey with me since I was an undergrad. 🙂

Oh and I also reached 1,000 followers on this blog! I never imagined I’d reach this milestone, because my blog started off as a really small space. Anyway, THANK YOU SO MUCH for sticking with me and being such a great support! I really appreciate and value each and every one of you.  ❤

And I actually already have a giveaway that was (kind of) planned for this occasion; it’s open until the end of August on my Instagram. (Sorry, I chose that social media platform because I want to grow my bookstagram account!) I encourage you to enter if you’re interested though! It’s international and pretty nice, in my opinion. So, friends, please share or give it a shot!

I finished my 2017 Goodreads challenge (and I always only count reading an entire manga series as one book, which makes this more impressive if I do say so myself). Honestly, it wasn’t that ambitious (only 25!) because I was unsure what my schedule would be like with school. For now, I have no plans of increasing it because I need to soon factor in juggling school with two jobs. :’) (I’m really more excited than anything though!)

The top reason why I waited reading Lady Midnight was because I didn’t like the characters when they appeared in the last book of The Mortal Instruments, City of Heavenly Fire. However, I was so blown away by how much they’ve changed. I really like them now that they’re not children and are older. Lady Midnight is  Cassandra Clare’s strongest first installment yet. It features a forbidden, best friends into something more relationship. (Looks like I’ll forever be shadowhunter and Cassandra Clare trash. I thought I was done with this world, hah.) 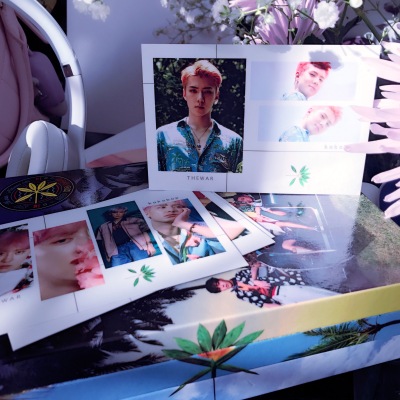 As earlier mentioned, my favorite boy band, Exo, came back with a new album called The War: Ko Ko Bop! And, of course, I bought all three versions (in Korean) and bought the Mandarin one digitally on iTunes. Typically, I’d love to collect them all and support my boys, but I couldn’t afford doing that this time with so many versions. Besides, Yixing wasn’t even part of this promotion cycle, which I’m both still bitter and relieved by. 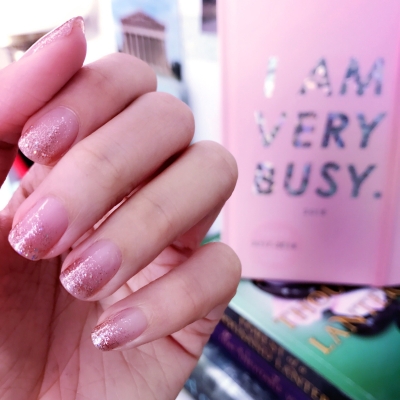 I did my nails… again! I’ve actually done this glitter gradient style several times before so it may look familiar. I just really like that it’s clear at the top and when there’s growth it isn’t as noticeable. Besides, I actually prefer lighter polishes and French manicures, or anything simple. (It also matches my new agenda!)

I’m currently making my way through Lord of Shadows (slowly because the wait for book 3 is going to be torturous), but what I really wanted to feature with this photo is the In the Wick of Time “Parabatai” candle. I’m sort of one the fence with literary candles. The concept is nice but the quality is definitely not up to par to Yankee Candle or Bath and Body Works candles, and, sadly, they’re expensive and the shipping makes them even less affordable. Also, it’s always a hit or miss when buying scents online… (I strongly dislike floral smells.) Despite all this, I think I’ll still collect them when I have the extra money just because of bookstagram and the way they look on my shelves. (Lol, I wasn’t expecting to make this a mini bookish/literary candle review… but let’s face it… that post I promised to do won’t be happening anytime soon.) Anyhow. I was beyond pleased with the Parabatai candle. It truly smells wonderful. Actually not much different from my Pantene shampoo, but with undertones of fruit.

Linkin Park was a big part of my life during my teenage years. (I’m sure other 90s kids can relate.) Me and my friends listened to the band’s songs nearly everyday and their lyrics really resonated with us at time. (The teenage years are some dark years, especially since it’s so common for that age group to be insecure and confused about many things.) Anyway, I was so, so sad when I heard about Bennington’s death. He was such an inspiration through what he shared in his music and words. Such a great loss. #RIPChester
(Watching this video really makes me cry. T_T)

Aside from Yixing’s absence and Kai’s hair, I have no complaints with this comeback. I absolutely love the title track, “Ko Ko Bop.” The MV itself is ultra trippy but I like that they’re using their superpowers again, haha.

I don’t mention them enough but I’ve become a big fan after “Don’t Recall.” “Oh NaNa” and “Rumor” were catchy but just okay to me. Their sophomore pre-debut song had me hooked though so I was so pumped for their comeback. I absolutely adore their friendship off camera and they all individually have great stage presences with unique vocal timbres. I’m already impressed with them as rookie idols; I’m looking forward to seeing how they’ll grow in the future. Also, my fave is Jiwoo (the girl with unicorn hair in this MV).

“Red Flavor,” this group’s title song for this comeback, is different and very Red Velvet but I don’t really care for it? I like “You Better Know,” a softer summer jam, better.

I can’t be the only one felt like this choreography reminded me of krumping? Anyway, I thought it fit the song really well and was one that really stuck with me this month. (I replayed it many, many times.)

In June, I liked Lee Hyori’s “Seoul.” Unfortunately “Black” wasn’t for me, but this somewhat simple choreo make me like this song a lot more for some reason.

My last dance video for July, I promise. I just had to include this because I love this song and Yoojung so very much.

I watched and caught up with a lot of the series I was watching in June about the first two weeks into July, but later in the month I didn’t watch a single anything. (I was too busy reading and taking bookstagram photos, lol.) Hence, why I’m still not completed Princess Agents and Suspicious Partner even though both have finished airing. 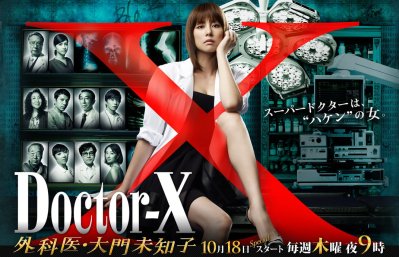 After historical period and fantasy dramas, medical ones are sort of my thing. I liked that this one had a sassy, independent heroine and that there wasn’t any romance. It was entertaining and by the end I grew attached to many of the characters. There are sequel seasons but I won’t be watching them since the supporting cast are all a new set of characters. (Though, I think some of the original ones return in the later seasons.)

This film is very… artistic. It’s, no doubt, an acquired taste for only certain audiences. The story is basically about youth and love, and follows a young teenage model as her family moves out into the country. (All these Japanese stories tend to start with some sort of move/transfer, I’ve noticed.)  This one is really out there though and borderlines being nonsensical. Not much is explained and there are many jumps of scenes. Overall, it wasn’t for me. Trigger warnings: rape. 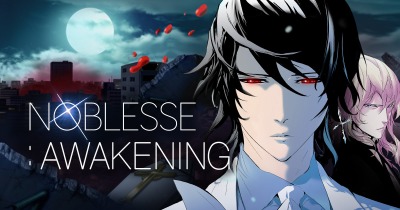 One of my friends told me that I had to watch this short animation (it’s about 30 minutes) adapted from a Korean manhwa, a Korean graphic novel series essentially. And I really liked it! The art was decent; I liked how the effects the supernatural had were illustrated. The main character was hilarious being so out of date with the modern lingo and customs. You can watch the full movie here since it’s released on Line Webtoon.

Since the last time, I’ve discussed this show I’ve only seen five episodes. I think it’s hitting the slower arcs of the plot at this point. Therefore, this is still engaging but slightly starting to drag as well.

I haven’t picked this up since the end of June so I suppose it was “on hold” in July. So, no thoughts for now. I only need to watch the last 4 episodes. I’ll report back next month.

And that’s all from my end! Thanks so much for tuning in and have a lovely day! (This is a scheduled post. I’ll be at work when this goes live, hehe.)