Happy November, friends! I hope that you all have been doing well. After I finish typing this post and it goes live, I will be replying to comments and (finally!) blog hopping the rest of the evening. (I seriously bookmarked blogs from, like, five months ago.)  And while on the subject of drafting blog posts, this is actually my 200th one! :’)

The next coming weeks should be like the calm before the storm (because school will lighten up a bit since final exams are in December) but I also have lots to look forward to. I’ll be attending Yallfest again this year, and I actually have my fingers crossed that I’ll be meeting Cassandra Clare and Marie Rutkoski. Clare will probably be a wristband author with her books’ popularity so I’m not sure if I’ll be able to see her, but we’ll see. Anyway, do expect an event recap for that later this month. 😉

Also, it’s not much longer before I’m off for winter break. This semester flew by so quickly and was probably one of the most stressful ones I experienced academically (pharmacotherapy is very challenging; I wish medicine and therapy were black and white but there’s so much gray), but I’m praying that I’ll survive till the end, haha.

Anyhow this month’s recap will be on the short but sweet side, because I really didn’t indulge in too much aside from the crazy shopping. And I suppose this is a good moment to put in a self promo plug like last month… If you do want to see my hauls and keep up with me (since I’m kind of inactive in the blogosphere nowadays), Instagram is the best way to do it! XD

They Both Die at the End 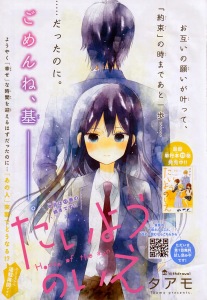 I’ve been feeling really slumpy in terms of reading so I picked up a manga called House of Sun (3/5 Stars) in October. I finished all 13 volumes in a week. I think the best aspects of the series was the romance and family. Also the comedy was A+; Daiki, my favorite character, was so deadpan about everything and therefore absolutely hilarious. I really wanted to buy this after reading it online but, to my dismay, the series has yet to be released in English aside for the electronic version. (And I don’t see the point in collecting e-manga when these books are so expensive as it is.) I’ll add it to my list to purchase for the future though. It was such a joy to read-despite my relatively low rating.

Edit 11/4/17: Oh my gosh, I totally forgot that I also read They Both Die at the End (4/5 Stars) earlier in October as well. It wasn’t until I logged onto Goodreads did I notice it on my profile. You guys now know to what extent of how out of it I am with my reading game. I can’t believe I forgot what I read, and a 4 star book at that, lol. XD

No surprise here. I’m still publishing once a month on the blog. >.< But hopefully this will change when I’m on winter break December-January.

Remember how I was very into bookish candles the past half a year? I think I’ve moved on into stationary and planner supplies. I wouldn’t call myself a planner addict though since I don’t really care about decorating my planner per se (well, at least, not religiously). I like using my stash of supplies for writing letters and sending cards to my friends.

I also recently converted to a new planner called the Hobonichi Techo 2018. I chose the Hydrangea cover because I obviously like color palette. I like that planner is very similar to the bullet journal format with the dotted paper, but it’s smaller and more compact. I wanted something different since I’ve been using the Ban.Do agenda for two years now. 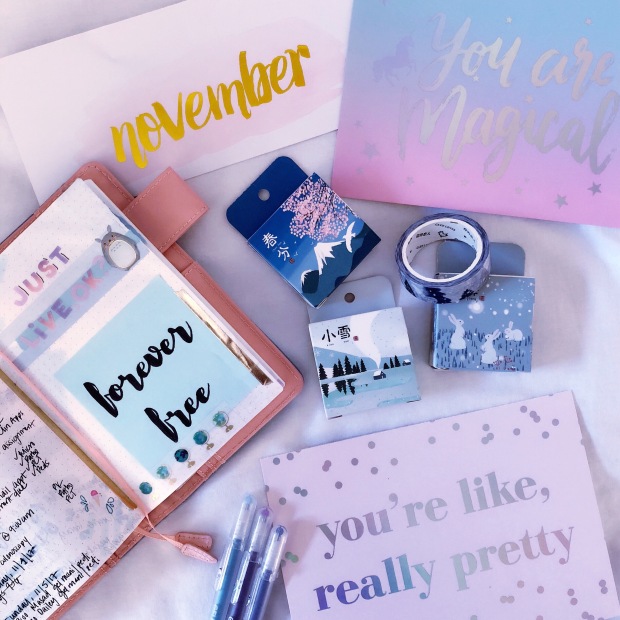 Bullet journaling never appealed to me before because I don’t think I’m that creative and it seemed like another time consuming hobby that I was not ready to take up. But, lately, I’ve started to do my own thing with my agenda/planner. It’s not exactly bujo-ing but I have been experimenting. Usually a weekly spread takes me ten minutes, max, to create since I mostly use stickers and keep everything simple. But it’s been therapeutic! I’m not sure if I’ll continue doing this in the future but, for now, it’s fun! (Tbh, I’m just winging it, lol.)

Autumn is such a beautiful season because of the turning leaves. Both the peppermint bark frappe from Joe Muggs (inside Books a Million) and the gorgeous red leaves of the tree in the background were my faves in October.

It must be the abundance of fanchants but I literally cried a little bit when I watched this the first time. I haven’t been a fan of Nu’Est for long even though I do remember their debut years ago. My BFF, however, used to really love them way back when though. I only recently became a massive fan and supportor of the leader, JR, after his appearance on Produce 101. Anyway, I am really happy that this group is getting the recognition they deserve. They were on the brink of disbanding before. (P.S. This was a live performance but here’s the MV if you’re interested. I love that the W in this subunit of Nu’Est stands for “wait” and that this song is highkey talking about Minhyun, who’s currently promoting with Wanna One.)

This was easily my favorite and most listened to non-Asian song from last month. It had the perfect chill vibes.

Oh gosh. I absolutely adore Sejeong (she has such a pretty voice!) and Doyoung (he’s really a sweet kid). This was such an adorable MV and even more adorable song. Kind of gives me coffee house or bookstore music feels?

Yes, OF COURSE, I am still obsessed with “Serendipity.” I REALLY want the sheet music to this, but I know Smyang Piano doesn’t offer this unless you buy the book, which I doubt has this one since it’s a newer cover. T_T

– What I’ve Been Watching –

You know it’s been a busy month when the drama list is so short, haha. 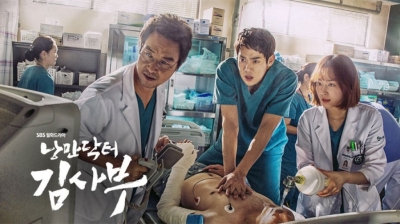 I started Romantic Doctor, Teacher Kim with low expectations because most medical dramas always end up disappointing me. (And I’m not much of a fan of Grey’s Anatomy; I don’t know why there’s so much sex in that one??) In fact, I even thought that med dramas might not be the genre for me. Thankfully, I was proven wrong. I really liked this one. There was enough drama and heartfelt moments to make it feel like a K-drama. But a good chunk of it represented reality and healthcare pretty well. I also liked that not every patient survived. (That was a huge peeve when I watched other medical K-dramas.) Also, the male lead reminded me so much of Sehun from Exo. He was sort of dreamy, not going to lie. LOL. However, I was slightly letdown by the romance. I liked the main couple together but felt like their romantic storyline waned as the series progressed. I was disappointed with how little the medical conditions and terms varied; I wanted to be able to learn more, lol.

I’ve only just started watching this one at the end of October (like on the 30th). So far it’s promising because I like the cast and the romance is kept on the down low. But I’m a little worried it’s going to become another formulaic, predictable wuxia pretty soon. And, UGH, I smell a really complicated love polygon around the corner. >.>

And that’s the breakdown of my October! How did you guys spend last month? Any grand plans for November? Do let me know! 🙂