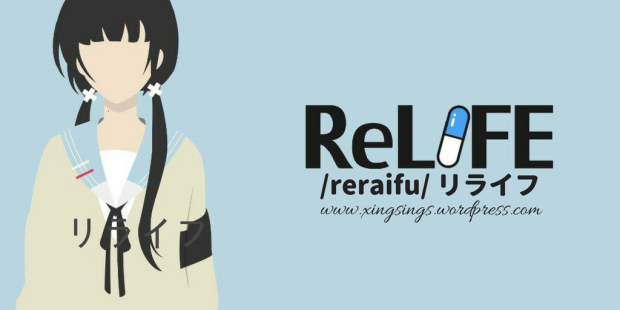 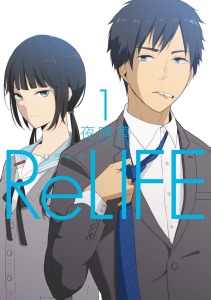 If at some point in life, you made a mistake or kept failing over and over again, and you can’t help but think it’s useless and you’re a good for nothing; remember, you’re only taking a detour. And I’m sure further along your path there will come a day where you think, “It was a good life experience.” That’s why it’ll be fine.

I’m bringing this old review back to life (no pun intended) because this series has finally reached its end and I really miss it (especially after watching ReLife: The Final Arc, which recently released in the States). Plus, I didn’t think my mini-review on Goodreads in 2016 conveyed my thoughts well enough or gave this incredible series the spotlight it deserves.

This was the only manga (or I guess I should say webtoon) that I followed so faithfully every Sunday for several years.

Before my first fall semester of pharmacy school, (no clue why I thought this was a good idea but) I had a fabulous one day anime marathon of ReLife (because for some unknown reason the entire season was leaked by TMS Entertainment in one night). I had such a fun time with the show that I immediately had to do some research and found the webtoon to further indulge in the engaging storyline. And, no surprise, I found the manga to be even better!

ReLife follows the story of 27 year old Arata Kaizaki, a guy that can’t find a job due to his departure from his previous employer only three months after employment. Then he meets Ryou Yoake who offers Arata a second chance through a program called ReLife. ReLife is designed to reintroduce NEETs (Those “Not in Education, Employment, and Training”) back into society by physically transforming them (via a pill) into their youthful forms and having them return to high school, where the company believes the root of many NEETs’ problems began, for one year. During the experiment, the subjects actually attend a real high school with real young students, and all expenses are covered. At the end of the one year study, all evidence of the subject’s existence will be erased from his/her peers’ memories. The only catch is that the subjects are not allowed to talk about the company, program, or process; and if they do, the experiment will end and the subject’s memory will be erased.

Clearly, the plot is very unique. Contrary to what many may think, Relife isn’t another typical young adult show. Sure there’s some teenage drama and coming of age themes since the primary setting is in a high school, however a lot of the conflicts are more complex than I initially anticipated. There was a perfect balance between the appeal towards younger and older audiences, and I really appreciated this.

The cast is also very relatable with their many insecurities and vulnerabilities.

My favorite character was the female lead, Chizuru Hishiro. Admittedly, I wasn’t keen on what kind of character she portrayed at first because she was yet another clueless, detached heroine that didn’t know anything about friends, relationships, and love. Such a common personality prototype in the shoujo-verse. 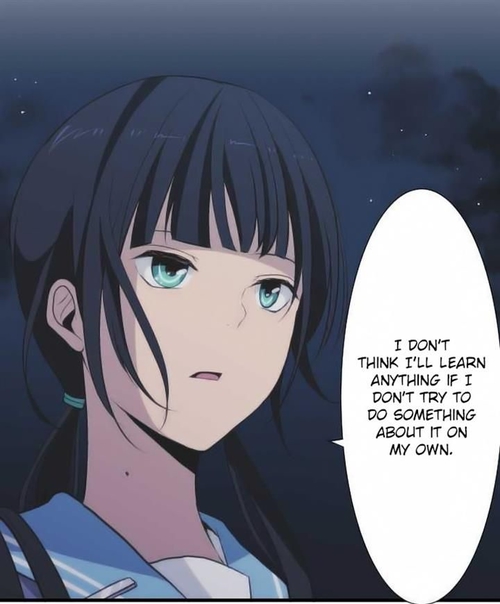 However, my first impression of her changed quickly as I read more. Though aloof, she doesn’t come on as annoying (as other female leads with this personality that I’ve encountered previously in the anime/manga world) in the slightest.

I want to defeat the me that’s dragging this failure around. I don’t want to forget my failure. But if I carry it with me as a bad memory and keep running away, I will never change.

Of course, she doesn’t make the best decisions, but she’s constantly giving her all to better herself in a way different from our main protagonist, Arata. She’s unpredictable, earnest in her actions, and possesses a hardworking attitude.

Even though everything is going to disappear, it isn’t supposed to be meaningless. It’s exactly because you know you’re going to part ways, that now and only now is your only chance.

Character development and evolvement is a common reoccurrence for almost all of the characters in Relife.

As how the anime was highlighted in its trailer, ReLife reflects a lot about life but there’s certainly some breakthrough humor to alleviate the more serious moments. I was cracking up so hard at the many comedic scenes; the familiar antics between the charming characters never got old. (The scene above isn’t as funny since it’s out of context but I didn’t want to include any spoilery gifs. This encounter shows just how bad Chizuru is with making friends. That’s her trying to “smile” and being friendly.) 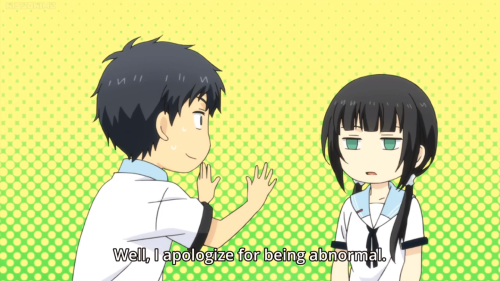 13 episodes and over 200 chapters later, I’ve been fully convinced to board the the Arata and Chizuru ship. Of course, the passion meter is nowhere near what you’d expect two adults to possess… but that fact that they’re stuck in their teenage bodies (and that each thinks the other is underage) makes this reasonable and appropriate. Plus, I find their awkward interactions refreshingly pure and delicate.

As expected of a webtoon, the art is super vibrant and crisp. I absolutely adore that at the end of each chapter Sou Yayoi includes a quick chibi sketch of a humorous or cheesy scene that draws out each characters tendencies so perfectly. Those closing panels were golden.

I could continue to gush about how much I loved this series but I won’t because I think it’s best that I leave you all to enjoy it for yourselves.

Someday we’ll part. Maybe be forgotten. But we’re living in the moment. So… make lots of friends, fall madly in love, and enjoy every moment to the fullest.

Ultimately, Relife was a sweet and touching slice of life series that went beyond my expectations; it’s way better than how it was first advertised (with the anime). I didn’t think I’d like it as much as I did. By the end, I really grew attached to the characters and the storyline remained addicting for what appeared as a “normal” series. It’s a shame that even after years, it hasn’t been serialized in English in the States. You can bet that if it was, I’d go out and buy it instantly. Anyway, don’t miss out on this gem!

The trailer to the anime:

The trailer to the live action film:

A song from the OST: 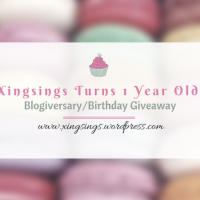