Between Shades of Gray sets place in early 1940s Europe. A young Lithuanian girl and her family are torn from their comfortable life and sent to a camp in Siberia and later a prison in the Arctics; at both locations and during the passages between they will witness and endure horrifying treatment from the Soviets under the rule of Stalin. This affecting novel recounts a journey that spans over several years and covers 6,500 miles. It displays one of humanity’s unfathomably darkest and most hidden parts of history.

END_OF_DOCUMENT_TOKEN_TO_BE_REPLACED

– read only the bold text to avoid major SPOILERS  –

Blood for Blood is the second and final installment to the Wolf by Wolf duology. It begins with Yael on the run after having just assassinated Adolf Hitler on live television. But it seems like the truth of what happened at the Victors’ ball is much more complicated than what the world saw. The man Yael shot was only another skinshifter, like herself, that took up Hitler’s face as a guise. The consequences for treason and murder is inescapable, and the Resistance is unable to recover after having started Operation Valkyrie too soon. The only way in saving the few people Yael has left in her life is for her to travel across enemy territory in hope of reversing the New Order and completing this last mission without fail.

END_OF_DOCUMENT_TOKEN_TO_BE_REPLACED 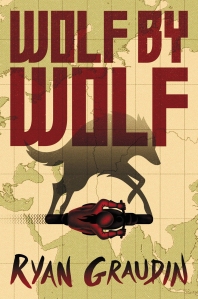 Once upon a different time, there was a girl who lived in a kingdom of death. Wolves howled up her arm. A whole pack of them-made of tattoo ink and pain, memory and loss. It was the only thing about her that ever stayed the same.

Her story begins on a train.

Absolutely stunning. Wolf by Wolf is one of those rare historical fiction novels where we all know how it ends because of history. Yet, Ryan Graudin still manages to weave a story that is ultimately gripping and unpredictable through using creative liberties to answer what-ifs and would-bes all the while adding a dash of some science fiction flavors of her own.

Graudin poses several possible scenarios in which the Second World War could have ended. What if Hitler and the Axis powers won the war instead? What if the unethical, medical experiments tested within the camps actually worked? Or what if a genetic fluke from said experiments backfired but was the prime solution to end this horrific period?

END_OF_DOCUMENT_TOKEN_TO_BE_REPLACED

“I need a SparkNotes interpretation of this” was the first thought that popped into my head when I finished page 232.

Initially, I thought this was going to be a light historical fiction novel set during the early years of World War II (but then again when is a book about WWII every light?), but I’m quite surprised by how this read more like a fairy tale mixed with some magical realism. And strangely, as I was flipping through each page I had these sudden urges to recognize every rhetorical device and wanted to annotate the entire thing. Anna and the Swallow Man rekindled the literature student in me (in a pleasant way).

In Anna and the Swallow Man, readers meet young, precocious Anna. Her father is a linguistic professor and naturally he knows many languages. In fact, so many that Anna doesn’t know what her father’s native tongue is. She grows up not really knowing how to identify herself. All she has are the many ways to say Anna. Anja. Khannaleh. Anke. Anushka. Anouk. But then one day her father leaves her in the care of an old friend and he never returns. Soon after, with the war wearing down the civilians, the hospitality her father’s friend once has dissipates and she finds herself at a level of despair and fear she’s never anticipated to experience before. All changes when she meets the mysterious Swallow Man. Despite his intimidating looks, Anna grows attached to this tall and peculiar man because he’s just like her and her father, one that is skilled in many tongues. They embark on a seemingly aimless journey and he teaches her his language, Road. A language that uses deceit for the purpose of protection and survival.

END_OF_DOCUMENT_TOKEN_TO_BE_REPLACED

I think the main reason why I have the habit of judging books by the covers is because I often do not read the synopses. Or when I do, I skim them briefly. However, I do tend to revisit the blurb after reading the book to judge its accuracy and level of spoilery. This tactic usually makes the plot more enjoyable for me.

The Midwife’s Revolt was no exception to this routine. I wasn’t expecting much since the cover is pretty plain, but this was an absolutely great read. The book is about young Elizabeth “Lizzie” Lee Boylston and her contribution to the American Revolution. Being the dense non-history buff I am, I had no idea some of the main characters were real people until John Adams and John Quincy Adams were introduced in the story. Anyhow, in this Lizzie recounts her life living in Braintree, Massachusetts (now called Quincy I think) as a midwife. The revolt part of the title comes in when she decides to help with the Cause by disguising herself as a man to spy in Loyalist taverns. There’s even some mystery as more events ensue, and Lizzie experiences loss, love, and betrayal.

END_OF_DOCUMENT_TOKEN_TO_BE_REPLACED

Hi! I'm a Viet-American book blogger residing in the southern US. I word vomit about a variety of things on my blog but mostly books. When I'm not gushing over fictional characters and K-pop stars, it's very likely I'm studying drugs. I also identify myself as an Asian drama & anime addict, vegetarian, ravenpuff, and Exo-L. (Yixing is my love, hence the unusual blog name.)